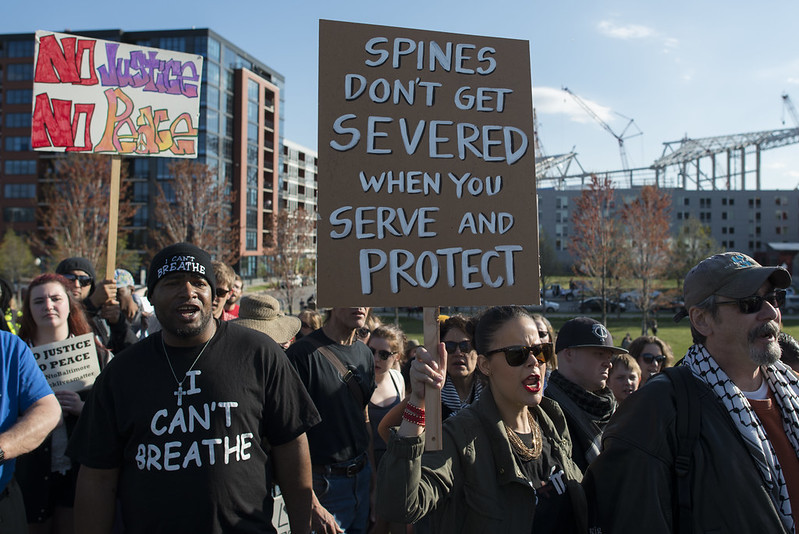 I teach an introduction to social cultural anthropology and linguistics course, and I have made sure that this course presents current societal issues that anthropology can best contribute to. As such, this past Tuesday, instead of talking about globalization (which was the topic of the day) we talked about what was happening in Baltimore. The reading for the day was Monster, Terrorist, Fag: The War on Terrorism and the Production of Docile Patriots, and even though we didn’t get a chance to discuss it, it was very appropriate for the discussion that we had.

The ground rules for the discussion were based on the concept of safe space. We were going to talk about sensitive issues, and I emphasized that opinions should be respected:  “let’s argue, but do so respectfully for the purpose of learning”. I also emphasized that if someone became uncomfortable and wanted to voice those feelings, they should bring them up; if that happened we would move on.

So we started the discussion by talking about the role of the media and how protesters are being characterized. We talked about coded language with racist undertones to describe Black protesters who were engaging in peaceful demonstrations.

We talked about systemic issues of poverty at the intersection of race given the socio-historical context of the city of Baltimore.

We talked about the difference between #BlackLivesMatter and #Alllivesmatter, and how the latter deviates the conversation and does not address systemic inequality.

We talked about the Stanford prison experiment and the psychological implications of people who hold positions of power. We also discussed empathy in the context of a research project that showed that White people thought Black people felt less pain.

We talked about Power (with capital p) and Institutions (with capital i). We talked about the role of the police as a representative of the government. In this case we have noticed that the government has been responding violently (to the point of murdering Black people for seemingly innocuous offenses or qualitatively different reasons than White individuals committing said offenses) when a particular group of people is perceived to challenge the superiority of its law enforcement.

We talked about how the Police should protect its citizens. The current contradiction is that the individuals who are supposed to protect us, are seemingly not doing so. We discussed the rationale of brown and Black folk not trusting the police (given the high profile cases of white policemen killing Black people being aprehended); similarly how women are enculturated to fear the night (given the grim statistics on sexual assault).

We talked about how if this were happening in another country, we would be concerned that the government was disproportionally silencing (killing) an ethnic group inside its borders. Think of civil war scenarios in Syria for comparison’s sake… or Rwanda…or…

As I hold a position of power, I felt the need to engage in this conversation. Anthropology students should be in a position to analyze what is happening 20 something miles away from us. Some students need to hear that their fears and concerns are real, and that there are some of us in temporary positions of power that can ackowledge that. Other students need to hear what their peers say and how their thoughts differ. The rest need to be challenged, so that they don’t stay silent and reproduce the racial discourses that sparked the current situation and continue to maintain inequality in Baltimore…in Chicago…in Long Island… In Ferguson…

4 thoughts on “Teaching about #Baltimore and #BlackLivesMatter”

This is a text widget. The Text Widget allows you to add text or HTML to your sidebar. You can use a text widget to display text, links, images, HTML, or a combination of these. Edit them in the Widget section of the Customizer.
%d bloggers like this: